The Danube represents one of the rivers with the highest transport volume with about 60 million tons in 2019. This article is a result of the IW-NET Danube Living Lab and summaries and visualizes the infrastructure along the Danube including bridges, locks and ports. UNECE waterway classification for the Danube ranges from Va to VII indicating which vessel type can be used at the Danube sections. Beside the waterway classes different kinds of infrastructure such as 18 locks and 75 ports at the 2,415 km long Danube ensure that the waterway consistently has a high quality for inland waterway transport.

The Danube is the world’s most international river with ten riparian countries and has a total length of 2,850 km. This makes it the second longest river in Europe. 2,415 km of the Danube can be used for inland waterway transport (IWT). From the perspective of the morphology of the river the Danube can be divided into three different sections: (1) The section upper Danube is the shortest one with 624 km and stretches from Kelheim (Germany) to Gönyü (Hungary). (2) The section middle Danube stretches from Gönyü (Hungary) to Drobeta-Turnu Severin (Romania) and has a length of 860 km. (3) The last section has a length of 931 km and extends from Drobeta-Turnu Severin (Romania) to Sulina (Romania) at the Black Sea. The navigable sections of the Danube are assigned to different waterway classifications as defined by the UNECE Inland Transport Committee. Figure 1 presents the river Danube as well as the different sections and respective waterway classifications.

At the upper Danube the waterway classification ranges between Vb and VIa. The section providing the lowest limits of waterway dimensions (waterway classification Vb) has a length of 32 km and is located between Kelheim and Regensburg close to the confluence with the Main–Danube canal. The classifications for the Danube in its middle section ranges from VIb to VII. The lower Danube section continuously has a classification of VII. A wide variety of different types of self-propelled vessels, push boats and non-motorized barges are operating in the Danube basin. More than 400 dry cargo self-propelled vessels with a total transport capacity of around 400,000 tons are in operation on the Danube (data of 2017). Most vessels are medium size with a transport capacity of about 1,000 to 1,500 tons per vessel. The most common vessel-dimensions can be seen in table 1.

Table 1: Common types of vessels at the Danube

In comparison with the Rhine fleet, where self-propelled vessels have the highest market share, the Danube fleet is composed mainly by barges and push boats. In total there are about 2,100 barges with a total transport capacity of around 2.6 million tons and 400 push boats (data of 2017). 70% of the push boats are older than 40 years and 59% of the barges are older than 35 years (data of 2017). Due to the different characteristics and waterway classifications at the Danube a wide variation of barge-combinations are able to operate along the river. The different convoy options can be seen in table 2.

Apart from the waterway classification different infrastructure like locks, bridges and ports affect the navigability of the Danube. Locks for example are a limiting factor for the dimensions of the vessels and barges especially concerning the width. In total there are 18 locks which can be seen in the following figure 2. The 18 locks are characterized by their different dimensions. For example two locks, which are located in the German part (Bad Abbach & Regensburg) at the upper Danube have a physical width of 12 m. The remaining 16 locks have a physical width of at least 24 m. Lock dimensions in general have a significant impact on the dimensions of the vessels. While the smaller locks on the German part of the Danube, as well as the locks on the Main-Danube-Canal, only can accommodate vessels or convoys with a maximum overall width of 11.45 m, the larger locks allow the operation of two specialized RoRo-vessels with a width of 23m along the Danube between Passau (Germany) and Ruse (Bulgaria). Considering the length of the Danube the total amount of 18 locks is relatively low. In comparison the navigable length of the river Neckar in Germany is about 200 km and 27 locks are located there. Figure 2 also presents the shallow river section between Straubing and Vilshofen (Germany) at the upper Danube with a length of 69 km. This bottleneck is particularly vulnerable to low water levels. On this stretch the river averages only 2 m in depth for 40 to 60 days a year.

Beside the characteristics of the different locks it is important for IWT to know where the bridges are located and also the individual bridge clearance. The bridge clearance is important for freight with more than average height above the waterline like multi-layers container transport or RoRo transport with several layers and is one of the main limiting factors for the number of container layers which can be carried by a vessel. The actual bridge clearance naturally varies with changing water levels, the dimensions given in bridge registers are therefore usually referenced to the highest navigable water level (HNWL). In total there are 130 bridges along the Danube. 96 of them are located at the upper Danube, 35 are located at the middle section and the remaining seven are situated along the lower Danube section. Some of the bridges are critical even for container transport with more than one layer considering HNWL. For a container transport with two layers in general a bridge clearance of at least 5.25 m at HNWL is deemed necessary. The bridges ‘Eisenbahnbrücke Bogen’ and ‘Luitpoldbrücke Passau’ both are located in Germany are critical for a two layer transport at HNWL. The positions of these bridges can be seen in figure 3.

The Danube is not only one of the longest waterways in Europe, but also one of those with the highest transport volumes. More than 60 million tons of goods where transshipped in 2018. The modal split for the countries along the Danube is quite different. The highest modal split share of IWT along the Danube corridor is found in Romania (29 %), Bulgaria (26 %) and Serbia (11.3%) (data of 2014). In comparison, the total modal split on inland waterways in the European Union is only 6.2 %. Around 75 % of the total transport performance on the Danube takes place on the lower Danube and only one-quarter on the middle and upper Danube. Metal products are dominating the transported goods at the Danube basin and have the highest share followed by products of agriculture. Table 3 presents a more detailed view of the transported goods classified by the European Standard goods classification for transport statistics (NST), for the year 2017. 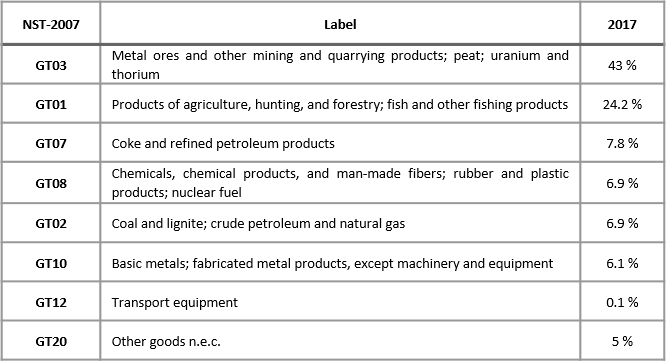 In 2018 more than 60 million tons have been transported on the Danube. To ensure an efficient transshipment in total 75 ports are located along the Danube. Of the total of 75 ports, 46 ports are classified by the UNECE as ports of international importance (E-ports), including the ports at the Kiliya branch and the Danube-Black Sea-Canal. 16 ports at the Danube had a waterside transshipment volume of more than one million tons in 2019. All of those 16 ports belong to the group of the E-ports. Figure 4 presents the geographical distribution of the 16 important ports with more than one million tones transshipment in 2019.

Figure 4: Important ports at the Danube

Corresponding to the modal split eight of the 16 mentioned ports with the highest inland vessel traffic are located at the lower Danube and had a waterside transshipment volume of 29.7 million tons all together in 2019. Furthermore, some ports which are located at the lower Danube are also accessible by sea-going vessels: Constanta, Galati, Reni, Ismail and Tulcea. Table 4 shows in detail the amount of transshipped goods and the corresponding Danube section and km position.

European commission (2016) Navigation on the Danube – Limitations by low water levels and their impacts.

European court of auditors (2015) Inland Waterway Transport in Europe: no significant improvements in modal share and navigability conditions since 2001