The Europe Automotive industry is producing assembled vehicles in high numbers which are mainly distributed by land freight. An interesting and promising alternative is to distribute this freight by inland waterways. The special inland RoRo vessels convince with a high transport capacity and the distribution process is less polluting, compared to transportation by truck and even by train. Considering the European inland waterways co2 emissions could be reduced by more than 60% during the distribution process.

The automotive industry is widely spread throughout Europe. The assembled vehicles outgoing from the factories are mostly transported by land freight to their destinations. The use of inland waterways for transport would be a more environmentally friendly option to distribute the high numbers of assembled vehicles.

To transport the assembled vehicles by inland vessels the so-called RoRo (Roll on Roll off) technology is used. RoRo means that the car is driven through the power of his own engine into the RoRo vessel. Furthermore, the use of inland vessels can help to reduce traffic on the roads, as these special inland RoRo vessels are able to carry up to 550 cars per transport. In contrast, a truck is able to transport only up to eleven cars. The RoRo vessel was already implemented for distribution by some automotive brands. For example, the automotive brand Ford transports assembled vehicles outgoing from Cologne to the ARA harbors (Amsterdam, Rotterdam, Antwerp). There are also RoRo activities on the Danube. Suzuki, for example, distributes assembled vehicles from Hungary to Germany twice a week.

To realize a modal shift to the RoRo vessel which can compete with the playing fields in the car distribution sector several criteria have to be considered. For example is the distance between the production plant und the next harbor a crucial factor or the vessel transport capacity is also an important factor. Before investigating the relocation potential from land to the European inland waterways it is important to identify the inland harbors which have the infrastructure to realize a RoRo service. Picture 1 shows how to unload cars from the RoRo vessel considering a special RoRo ramp. 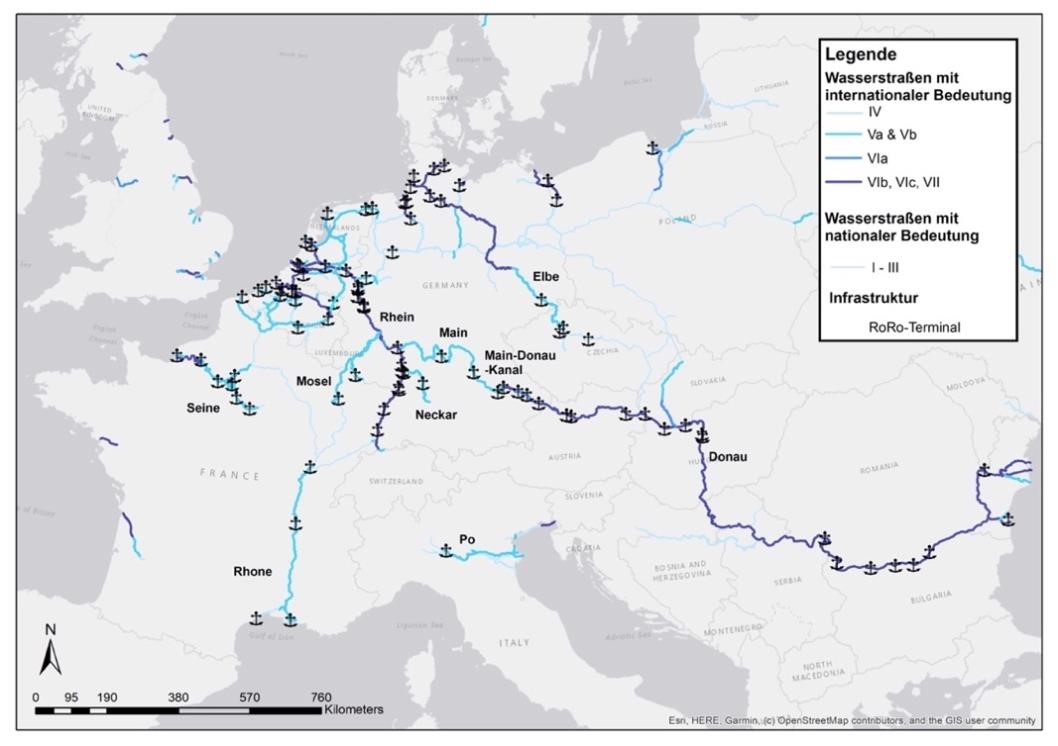 To identify the relocation potential it is important to know, where the European automotive industry is located. Therefore, over 60 production plants within Europe were identified. The following map in picture 3 shows the identified European car production plants and also the identified waterways classified into different categories. It is obvious that countries like Spain or Italy which have a strong automotive sector are not capable to distribute their assembled vehicles by inland RoRo vessels. 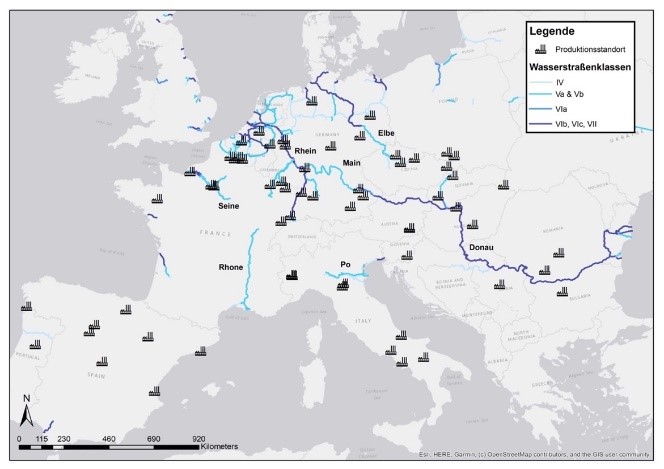 For a successful modal shift it is also important that the distance between the production plant and the RoRo terminal is as short as possible. For example the BMW Group has two production plants (Regensburg and Dingolfing) near to RoRo harbors at the Danube. The BMW Group stated a high number of annually new car registrations in the Netherlands. These transport flows have a high relocation potential using the Danube, the Main-Danube-Canal und the Rhine. A modal shift considering the inland vessels would lead to a co2 reduction even higher than 60%, compared to a distribution by truck. Furthermore, there are more European production plants at the powerful waterways Rhine and Danube from different automotive companies with relocation potential, e.g. Volvo in Gent (Belgium) or Mercedes-Benz in Rastatt (Germany). For these production plants also a significant possible co2 reduction could be identified.

To realize a modal shift some main criteria have to be regarded. To operate a RoRo vessel at full potential, a high number of assembled vehicles are required annually. Also, the water infrastructure has to be powerful and special RoRo ramps as well as RoRo vessels are required.From an economic and an ecological point as well, RoRo vessels become more efficient when the relocated distance on the inland waterways is long. Particularly, on the river Danube assembled vehicles can be transport over long distances.

Considering the high annual production numbers of the European automotive industry and the powerful European inland waterways and there free capacities, the RoRo vessel is a promising alternative compared to the truck and also compared to the train. A modal shift at the assembled vehicle distribution sector would have significant environmental impacts. co2 emissions could be reduced by more than 60 % during the distribution.